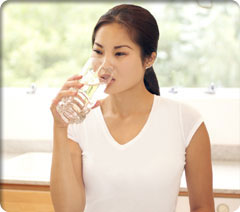 If you have a question that is not answered below that pertains either to water or an Aquasana product, email us at shop@aquasana-china.com

Question: Is bottled water or filtered water better?
Answer: While much bottled water is of good quality, there are little or no regulations or means of ensuring bottled water quality… it is a self-policed industry for the most part. In contrast, the home water treatment industry is very heavily regulated. Manufacturers must do extensive testing and reporting to prove their products effectiveness at providing quality water. Manufacturers are required to supply “Performance Data Sheets” demonstrating the products ability to remove certain contaminants; bottled water companies are not required to demonstrate their waters quality. See Bottled Water, Is It Better?

Question: What is TDS?
Answer: Total Dissolved Solids, the total measurement by weight of all solids that are dissolved in water. The dissolved solids in water are primarily calcium and magnesium and would not be a measurement of contamination. Tests which measure the conductivity of water (often used by companies selling reverse osmosis and distillation system ) only give a rough estimate of dissolved solids, mostly minerals, and do not show water quality. Implying that these tests show water quality is highly misleading and should be considered unethical.

Question: Is Chlorine harmful?
Answer: Chlorine was first added to a community water system in 1908 in Chicago and was instrumental in eliminating many types of water-borne disease such as Cholera and Typhoid fever. Prior to chlorination, many major cities had death tolls of 1 in 1000 people from Typhoid alone. Chlorine has been used to disinfect municipal water for over 80 years and has had some positive effects on public health. In the 1970’s it was discovered that chlorine, when added to water, forms Trihalomethanes (chlorinated by-products) by combining with certain naturally occurring organic matter such as vegetation and algae. In 1992 the American Journal of Public Health published a report that showed a 15% to 35% increase in certain types of cancer for people who consume chlorinated water. This report also stated that much of these effects were due to showering in chlorinated water. The National Cancer Institute estimates cancer risks for people who consume chlorinated water to be up to 93% higher than for people who do not. The effects of drinking chlorinated water have been debated for decades. However, most experts now agree that there are some significant risks related to consuming chlorine and chlorinated by-products in drinking water.
Chlorine and Cancer

Question: Why do some areas test negative for chlorine?
Answer: Virtually all city water systems contain some level of chlorine. The level will vary based on outdoor temperature, the season, distance from water utility and current usage. While chlorine may sometimes be undetectable on a certain day with a standard OTO test kit, that level can change dramatically day to day. Also some cities use ammonia at certain times as a disinfectant in order to reduce chlorination by products. Without chlorine the dangers of water borne disease would be too significant. An undetectable chlorine level, on a certain day, does not eliminate the need for an effective home filtration system.

Question: What do you do if you have water contaminated by radioactive matter?
Answer: Move! Radioactive water is not very common in this country and is a more serious problem than should be dealt with by a home water filtration system. Many people confuse the contaminant “Radon” with radioactivity when in fact they are quite different. Radon is produced from decaying Uranium ore and can be effectively removed by carbon filtration.

Question: What are VOCs?
Answer: Volatile Organic Chemicals are synthetic compounds that turn into vapor at relatively low temperatures. VOCs typically vaporize at a much lower temperature than water. Most synthetic chemicals found in water, such as pesticides and herbicides, are VOCs.

Question: Do people on private wells need to use shower filters?
Answer: There are many health and cosmetic benefits to removing chemicals and compounds from shower water, even on non-chlorinated private wells. Virtually all ground water contains traces of some chemical or chemicals that can be absorbed through the skin or inhaled. Also the Aquasana shower filter system helps balance the waters pH, which is also a very noticeable cosmetic benefit.

Question: What is the best container for storing filtered water?
Answer: Glass is always best, however if glass is not practical, then a high grade polycarbonate material is best. Clear plastic bottles and pitchers with a #1 in the recycle triangle on the bottom, like the bottles used by Evian and the higher quality bottled waters, are the best option for water storage since they have been shown to release the lowest levels of plastic component chemicals into water. Translucent, colored or bottles with a number other than 1 on the bottom should be avoided because there is the possibility of higher levels of chemicals leeching into the water from the plastic.

Question: Do water treatment products require FDA approval?
Answer: No. However, the certifications which apply to the Aquasana products require proof that all wet component materials meet FDA requirements for food grade materials. The performance claims of the Aquasana 4000 system have been validated and certified by the California Department of Health Services and include toxicology extraction tests to show no harmful release of any substance into the filtered water.

Question: Are whole house systems (P.O.E.- point-of-entry) better than counter-top filters (P.O.U.- point-of-use)?
Answer: P.O.U. systems are by far the best way to ensure the highest quality water since many water-borne contaminants come from the plumbing in your house, especially lead and vinyl chloride from the piping. By filtering water at the point-of-use you remove contaminants just prior to consumption, eliminating the chance of recontamination. Point-of-entry systems offer certain benefits but do not replace the benefits of point-of-use filtration.

Question: How do you know if there are contaminants in your water?
Answer: All public water systems contain some level of one or more unhealthful chemicals. Regulations only require periodic testing of about 90 chemicals. There are now more than 75,000 chemicals used in our society with over 1000 new ones being developed each year. Contaminant levels fluctuate throughout the year making it impossible to know the actual level of contamination in a central water system. So far over 2100 toxic chemicals have been detected in America’s water systems. The risk is high; the cost for a sure solution is low, 9¢ per gallon with Aquasana.
See What’s in my water?

Question: Are some people more sensitive to chemicals in drinking water and shower water than others?
Answer: Definitely, small children and the elderly are especially more affected by contaminants in water due to a reduced capacity to deal with toxins and an under-developed or less tolerant immune system.

Question: If my municipal water company’s Annual Water Quality Report shows that it meets all EPA guidelines, does that mean its safe?
Answer: On October 1st 1999 a new federal law went into effect that requires water utilities to send each customer a detailed report showing what is in their water, appropriately called “The Right To Know Amendment.” The most important thing to remember is that no matter how insistent these reports are that “contaminants in your water do not necessarily pose a health risk”, any level of contamination in our drinking water does in fact represent a danger to our health. Of the over 75,000 toxic chemicals used in our society, the EPA has only set standards (MCLs) for about 90, and those 90 Maximum Contaminant Levels are not necessarily set on “health effects.” The EPA considers limited health studies based on consumption of one certain chemical by a 175 lb. adult when setting these standards. No consideration is given to the effects on small children or the combined effects of two or more contaminants, which some studies show are magnified by as much as 1000 times. Water utilities are only required to test for the 90 contaminants that the EPA has set standards for.

Nobody knows how many toxic chemicals may actually be in tap water. According to the Ralph Nader Research Group, after reviewing thousands of pages of EPA documents acquired through the Freedom of Information Act, more than 2100 toxic chemicals have already been detected in U.S. water supplies. Virtually all public water systems have some level of contamination. The water utilities are usually quick to point out that the chemicals found in their water are “below EPA’s Maximum Levels”, and in most cases they are. The fact is that even the smallest trace of a toxic chemical causes damage and science is just now starting to realize to what extent. In a recent report from the National Cancer Institute to the Surgeon General it was stated that “No level of exposure to a chemical carcinogen should be considered toxicologically insignificant to humans,” and we are learning the hard way the truth of this statement.